How to grow and care for Freesias in Whatcom County 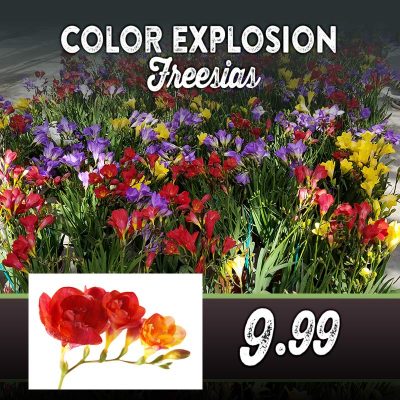 Available in a rainbow of colors, including pink, white, red, orange, yellow, and purple, you can create a vivid bouquet using nothing but freesia flowers. Some consider red and pink flowers to have the headiest fragrance. Healthy plants should produce five to seven tubular flowers per stem, all pointing in one direction like fingers. Freesia foliage is narrow and grass-like.

Freesias should only be grown in a spot where they will receive full sun for most of the day.
Prepare the planting hole by adding some coarse builder’s sand and cultivating in peat moss, compost, ground bark or decomposed manure.
In the garden, Freesia bulbs (corms) should be planted 2″-3″ deep and 3″ apart, with the pointed end facing up.
Freesias are only hardy in USDA zones 9-10. In Whatcom County, Freesias should be planted in mid-spring, after all danger of frost has passed.
Freesias bloom best when nighttime temperatures remain below 50°.

Keep well watered all through the growing season, but allow the soil to slowly dry out when flowering stops.
Do not remove the foliage until it has died back naturally, to allow the leaves to capture
and the bulbs to store energy for next years show.

Apply a balanced flower fertilizer at this time, and keep the plants in full sun. Fertilize them again when buds appear.

If you’re interested in propagating your freesia, you can dig up the dormant corms in the summer. You’ll notice small corms forming as offsets from the main corm. Remove these and plant and care for them as you would the mature corms; flowering may occur one-two seasons later.

Once again, in Whatcom County the corms will need to be dug after the foliage turns brown, and stored in a cool, dry area until next spring.

Some gardeners complain that freesias are fussy and difficult to grow. A big part of growing this flower is replicating the growing conditions of its native African habitat. You must find a way to keep the corms warm and dry during the summer dormancy period, and very cool and damp during the active period of growth. Cool means more than “I need a cardigan;” so get out your thermometers: The plants need nighttime temperatures around 50-55 degrees F to form buds. Many gardeners don’t have access to a cool greenhouse, but taking the extra effort to move the pot into an unheated garage or shed each night may reward you with flowers.

Freesia stems are thin and can’t always support the weight of the flower heads, especially in varieties that produce double blooms. A grow-through staking system that has a grid to support the flowers and leaves will keep the plants upright.

Freesia plants will appear to decline after their active blooming and growth cycle. The plants are probably entering dormancy, not dying, so don’t discard them. Trim back yellowed foliage, and keep the container in a dry place. You can move the container outdoors in the spring, keeping the dormant corms in a dry, warm spot until fall growth begins again.

Freesia plants are best grown as an individual specimen in a container for most gardeners, due to their specific growing requirements. If you live in a Mediterranean climate that mimics the native growing conditions of the plants, they are a must for the cutting garden. You should cut the flowers for bouquets when the first flower on the stem is open, and the rest are beginning to show color. Expect your fresh cut flowers to last about 12 days in the vase, as compared to five to seven days for purchased flowers.