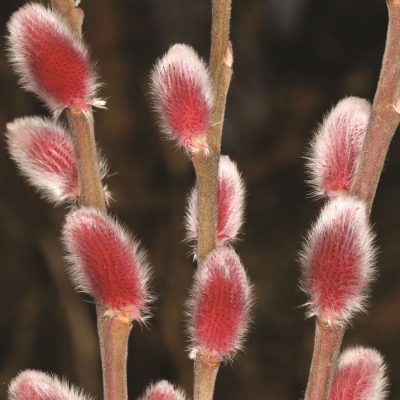 Selected in Japan by a cut-flower developer, this pinkish-red male selection forms a spreading shrub 6ft x 6ft with handsome bluish-gray leaves that are silky underneath. The twigs are covered with a grayish-tan fuzz (indumentum) and in September the pink flower buds start to develop. Here in Whatcom County, the catkins start to swell in late January and open in February and March, depending on the temperature. ‘Mt Aso’ will even open for Valentine’s Day if cut and brought inside a few days before the event! They make a wonderful alternative to red roses, as you can grow these yourself for your beloved! The flowers are as soft and silky as they look and open about 1in long. They gradually expand as they mature and when the pollen is fully exposed they are closer to 2in long.

It’s a non-fussy shrub that will grow almost anywhere in full sun; in sandy, average or moist soil (as long as it is watered regularly in areas of low rainfall). Hardy to Zone 4.

USES: As an ornamental shrub; coppice every 2-3 years to maintain a steady supply of young stems that produce the most flowers. Cut stems can be brought inside from late January on and should be placed in 3-4in of water until the flowers expand. Then remove the water and the dried stems will hold the pussies for months.

KIDS ART IN THE GARDEN